Cyber warfare encompasses nation-state activities taken against enemy computer systems and networks with the intent of controlling, compromising, or disabling function through electronic methods. The potential impact of cyber warfare is perhaps best described by an unnamed Chinese general who stated in 1996, “We can make the enemy's command centers not work by changing their data system. We can cause the enemy's headquarters to make incorrect judgment(s) by sending disinformation. We can dominate the enemy's banking system and even its entire social order.”[1]

In 2007, according to a Gartner report, thirty nations were developing cyber warfare capabilities and predicted that 30% of all nations will have cyber warfare capabilities by 2012.[2]  The United States is leading the world in investment in cyber warfare infrastructure.   In 2006 the U.S. announced the creation of the Air Force Cyberspace Command.  During the announcement of the division, Secretary of the Air Force Michael Wynne said “The aim is to develop a major command that stands alongside Air Force Space Command and Air Combat Command as the provider of forces that the President, combatant commander and the American people can rely on for preserving the freedom of access and commerce, in air, space, and now cyberspace.”[3]

Cyber Warheads – Stuxnet
Until early 2010, what a cyber weapon would actually look like, when it would be first used, and against whom and what it would be launched against remained in the realm of conjecture. On June 17, 2010, the Belarus-based security firm VirusBlokAda Ltd discovered a new piece of malware resident on an Iranian-based client’s system that made cyber warfare manifest. Stuxnet isn’t just a one-off piece of malware. It is a framework for development of future cyber-warheads.

In short, the function of Stuxnet is to damage the Iranian Natanz nuclear fuel enrichment plant and, possibly, the Iranian Bushehr nuclear power plant. Nuclear fuel enrichment plants use centrifuges to produce low enriched uranium. Stuxnet reprograms the Siemens industrial control system used at the Natanz enrichment facility to cause the IR-1 centrifuges to spin at rates and in patterns harmful to the centrifuges. Stuxnet also shutdown related warning and safety controls that would alert plant operators of the odd centrifuge behavior.

While Stuxnet infections did not remain isolated to Iran, data collected by Symantec through its monitoring infrastructure revealed that Iran hosted 58% of the total infected systems. Indonesia and India followed distantly with 18% and 10% of the total infected hosts.[4] And, it seems to have achieved at least some of its intended effect. In late 2009 to early 2010 Iran replaced about 1,000 IR-1 centrifuges at their Natanz facility.  On November 23, 2010, the leader of Iran’s Atomic Energy Organization, Ali Akbar Salehi, confirmed reports of cyber attacks against Iran’s nuclear facilities: “One year and several months ago, Westerners sent a virus to [our] country’s nuclear sites.” On November 29, 2010, Iranian President Mohmoud Ahmadenejad confirmed the reports in a news conference. “They succeeded in creating problems for a limited number of our centrifuges with the software they had installed in electronic parts.”[5]

Compromising the industrial control systems of the Natanz fuel enrichment processing facilities was no trivial task. Once released, the malware had to autonomously achieve some seriously daunting tasks. Ralph Langner, the pre-eminent Stuxnet expert, summed up Stuxnet best. “Stuxnet is like the arrival of an F-35 fighter jet on a World War I battlefield. The technology is that much superior to anything ever seen before, and to what was assumed possible.”[6]

With Stuxnet out of the bag, Governments around the world are scrambling to respond; assessing the exposure of their own critical infrastructure to Stuxnet-like malware and, no doubt, developing their own cyber warheads for use against all sorts of industrial control systems.

Targets
One of the prime target of cyber weaponry is critical infrastructure controlled through electronic Supervisory Control and Data Acquisition (SCADA) systems. The SCADA systems allow remote monitoring and control of a broad deployment of physical world infrastructure. In the hands of asset owners and operators SCADA systems greatly increase operational efficiencies and capabilities. In the wrong hands SCADA systems could disrupt or corrupt delivery of essential services. Consider how SCADA systems are used across a few industries:
Railroad – Automatic Train Control (ATC) systems provide remote computerized monitoring of train position, control of train speed, and rail switching.
Water – Water Works organizations use SCADA systems to monitor water quality, flow, pressure, and operational status. They also use SCADA systems to control water production, distribution, and blending. Back in 2008, a California municipality published details of their SCADA water systems on its web site, going as far as showing a screenshot of their SCADA Human-Machine Interface (HMI).Probably not a great idea. 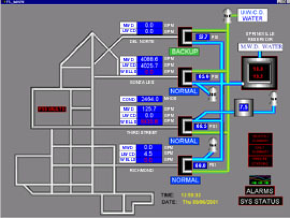 As most SCADA systems are not directly Internet-accessible, the likely SCADA system compromise path is to compromise a system that has access to the network on which the SCADA system resides and use that as a staging point for the attack against the SCADA system. With advanced malware kits that provide hackers persistent, stealthy remote control this possibility is very real.